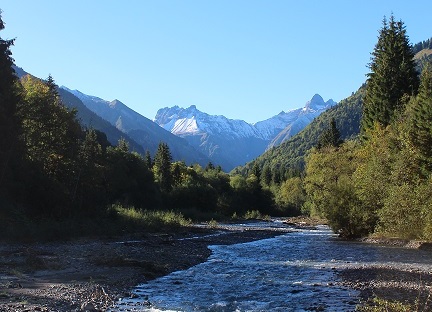 Note: this blog post is in English, in case some international figure skating fan Facebook friends want to read it 😉

This year was quite a monumental anniversary for Germanys oldest figure skating competition: Nebelhorn Trophy in Oberstdorf took place for the 50th time. In the past couple of years my friend S. (see her blog Glimrende for her impressions) and I haven’t missed this competition very often and despite the fact that our figure skating fandom has become rather mild over the years, we still enjoy the yearly tradition of visiting Oberstdorf for Nebelhorn Trophy. Of course the fact that Oberstdorf is a lovely place in the middle of absolutely awesome mountains doesn’t hurt either 😉
In the past years Nebelhorn Trophy always started in the morning and usually our favorite competition parts took place during the day, which made it sort of hard to combine watching figure skating with hiking. So we were very pleasantly surprised when we looked at the schedule for this year, the competition never started before 2pm and they finally put the men’s competition parts in the beginning, something we’d been hoping for for years (nothing against men’s skating, but in the past year it has become rather technical and focused on quad jumps and it’s just never been my favorite competition part to watch in the first place). This meant we’d have plenty of time for hiking and would still get to see most of the skating. I really hope they keep this time schedule (I also still wonder why the competition always started like 4 hours earlier for the last 49 years, this new schedule seems much more audience friendly too, since I don’t think casual tourist visitors will show up in the morning (unless it rains badly), when there’s so much other stuff to do in the mountains). Talking of audience, it seems the Olympic win of Aljona Savchenko and Bruno Massot had a big effect on attendance, since all the competition parts seemed to have double as many viewers as usually (it will be interesting to see whether this will slowly drop down to normal over the next few years…).

This year we’d arrived a day before the competition, so we could use the arrival day for getting some yummy cake and taking a small walk outside Oberstdorf.

But since the weather was so beautiful we decided to walk a bit further towards „Spielmannsau“ and then back to Oberstdorf by the very small, but impressively blue lake „Christlessee“.

Overall this meant a hike from over 20 kilometers, but it was absolutely worth it!

Bring on the skating

Since we arrived a bit later than planned, we only saw the last group of the ladies short programs. I really enjoyed the competition, first of all it was a great opportunity to get to see the Olympic Champion Alina Zagitova. She skated to „Phantom of the Opera“ and of course was clearly the best of the competition (although I was not THAT crazy about the SP music, which was a bit overly dramatic). I also really liked Loena Hendrickx from Belgium, who has improved so massively over the last few years, what I especially like about her is that she’s both technically strong and powerful, yet also very artistic and expressive. Mariah Bell from the US also is a skater with a powerful yet expressive style. I liked both well enough that I could even forgive them for both choosing Celine Dion for their short program music 😉 Mai Mihara from Japan also had a lovely skate in her typical understated and elegant style. Overall I thought the ladies SP was very entertaining, despite nearly all of the music choices not fitting my musical taste.

I expected near to nothing from the Short Dance or Rhythm Dance (it seems to change names every year at the moment), since ice dancing has become rather boring and uninspired over the last couple of years and decades. Also the theme of the RD was „Tango Romantico“ which brought back memories of one of the most boring Compulsory Dances of the past. But luckily the variety of music that falls under Tango Romantico was a lot more varied and dynamic than I had feared. I have to say I enjoyed most of the programs, even though a lot of the teams still had some „early season“ problems (I think we saw 3 falls). My favorites were (as expected) Gilles and Poirier from Canada, but I also enjoyed the dances from Jennifer Urban and Benjamin Steffan, since the Tango theme seemed to fit their personality really well and from Koch & Nuechtern. Generally I thought the German dance teams looked quite good at Nebelhorn Trophy (even if I still hope that Joti Polizoakis also finds a new partner soon, the more competition the better ). Overall I enjoyed this rhythm dance more than any of the ice dancing at Worlds in Helsinki last year…

Unfortunately the last competition part of the evening, the Pairs SP was the weakest in my opinion, since many of the teams still seemed to struggle with their elements. Especially Knierim & Knierim seemed rather overburdened with the complexity and difficulty of their SP, so on top of problems with the jumps, their skating and transitions looked rather laboured. Hopefully they’ll be able to grow into the program and Aljona Savchenko as a coach won’t expect stuff from them that is beyond their abilities…still they managed to hold on to first place, since the rest of the field didn’t do better either. A rather positive surprise were Minerva Fabienne Hase & Norman Seegert, who seemed rather polished this early in the season and had a good skate after initially messing up their 3twist a bit. Also the Croatian team had a rather clean and nice skate, even if they of course were not as strong as the top teams overall. The only thing that was pretty much equality unwatchable from all the teams were the sbs spins, which apparently nobody manages to do in synch anymore…